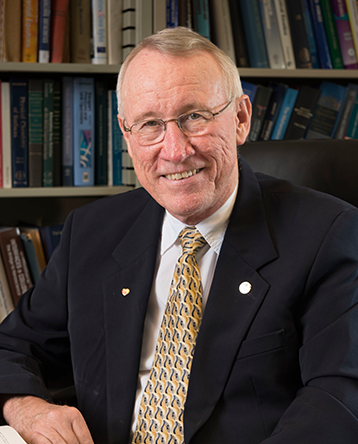 Dennis C. Prieve is Emeritus Gulf Professor of Chemical Engineering. He also currently serves as editor of Colloids and Surfaces and is the past president (2009-2012) of the International Association of Colloid and Interface Scientists (IACIS).

Prieve joined Carnegie Mellon in 1975 after receiving a Ph.D. from the University of Delaware, and a B.S.Ch.E. from the University of Florida in 1970. His research interests focus on the nature and measurement of colloidal forces, and their effect on transport of colloidal particles, especially electrokinetic phenomena and chemically-driven flows. Since 1987, he and his students have developed Total Internal Reflection Microscopy which uses evanescent-wave scattering and optical tweezers to measure sub-piconewton colloidal forces between a single microscopic sphere and a flat plate without touching the sphere.

Prieve has been a visiting professor at Princeton University and the University of Melbourne, Australia. He received the 2011 ACS Award in Colloid & Surface Chemistry, and the 2007 Lectureship Award of the Colloid Science Division of the Japanese Chemical Society. Elected Fellow of the American Institute of Chemical Engineers in 2004, he also received the AIChE Alpha Chi Sigma Award for chemical engineering research in 1995. Prieve chaired the 2002 Gordon Research Conference on Chemistry at Interfaces, and co-chaired the 2004 International Electrokinetics Conference (ELKIN).

In the first installment of our alumni spotlight series, we sat down with the Executive Vice President of PPG Industries, Rebecca Liebert, to find out how she became interested in the field of engineering, talk about her experience at Carnegie Mellon and discuss the future of ChemE.