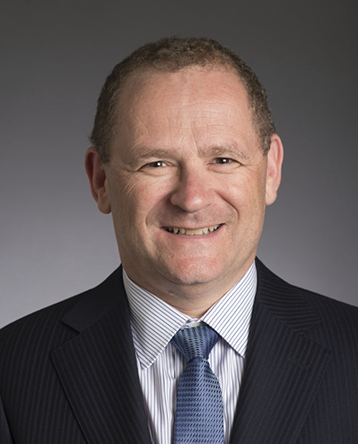 Alan Russell is the Highmark Distinguished Career Professor at Carnegie Mellon University and the director of Carnegie Mellon's Disruptive Health Technology Institute. Russell is also the chief innovation officer and executive vice president of the Allegheny Health Network. Russell was educated at the University of Manchester (B.Sc.) and Imperial College (Ph.D.) before becoming a NATO Fellow at MIT. He then accepted a position at the University of Pittsburgh in the Department of Chemical Engineering. After serving as chair of the Department he became the founding director of the McGowan Institute for Regenerative Medicine.

Russell has published over 150 papers and been awarded over 20 patents. His research team described the first use of enzymes in ionic liquids, the first use of pressure to control enzyme activity in supercritical fluids, the first stabilization of enzymes for chemical weapon defense, and the first use of ATRP to grow polymers from the surface of proteins. Russell's enzyme stabilization technology was singled out for the U.S. Army's Greatest Invention Award and products containing the core chemistry are now used to monitor activities in countries suspected of developing and using chemical weapons. The technology has been the foundation for almost $1 billion in procurement contracts since it began as a thesis topic in the Department of Chemical Engineering at the University of Pittsburgh. Russell currently serves on the boards of Greffex Inc., Applicell Inc., and a new emerging medical imaging company, Optix Medical. Russell has been the recipient of multiple prestigious awards, including the ESWP's President's Award for Engineering Excellence and the TERMIS Lifetime Achievement Award, and was ranked #32 in Rolling Stone's "Top 100 People who will Change America" in 2009.

Salting down the cost of protein-polymer drugs

Alan Russell and Stefanie Baker have developed a novel method to purify the protein-polymer conjugates used in pharmaceuticals to ensure they perform properly.

Protein engineering company Biohybrid Solutions, founded by ChemE’s Alan Russell and Chemistry’s Kryzsztof Mtyjaszewski, has just been awarded a $30 million contract by the U.S. Department of Defense. This award, granted through the U.S. Defense Threat Reduction Agency (DTRA) and sponsored by the Medical CBRN Defense Consortium (MCDC), will support the application of BioHybrid Solutions’ “proprietary NanoArmored protein engineering technology to improve pharmacokinetics of the prophylactic while reducing the potential for immunogenic side effects.”

The root of the matter

A team from the College of Engineering has used the natural architecture of the mangrove tree to unlock a better method of desalination.

ChemE’s Alan Russell was awarded the 2018 Innovator Award by the Pittsburgh Business Times for his work with BioHybrid Solutions, a company he co-founded with Chemistry’s Krzysztof Matyjaszewski.