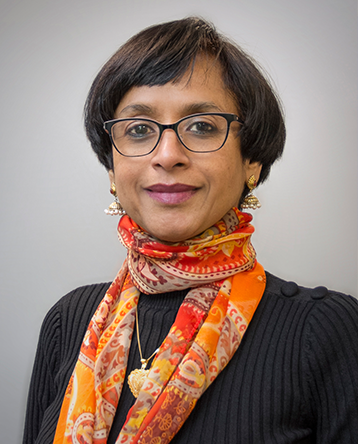 Nisha Shukla is a special faculty member in the College of Engineering at Carnegie Mellon University.

The main focus of research in her laboratory has been the development of chiral NPs for enantioselective chemical processing. Chiral NPs have atomic structures with a specific “handedness” that allows them to discriminate between the handedness of complex chemicals such as biomolecules and pharmaceuticals. Enantioselective production of chiral chemicals requires the use of chiral media such as chiral catalysts. The development and applications of enantioselective processes underpins the production of enantiomerically pure pharmaceuticals and agrochemicals to supply the huge (> $200 billion/year) market for these compounds.

In another project, we are trying to develop a new type of quartz crystal sensor that can be used in quartz crystal microbalance (QCM) systems for detection of analytes in water-based systems and for enantiospecific adsorption of chiral pharmaceuticals. The sensor will be based on a standard quartz crystal but with electrodes manufactured from nanoporous gold (np-Au) rather than dense gold. The nanoporosity of the Au films increases their surface area by 100-fold, and it has been demonstrated that this can increase QCM sensitivity by an order of magnitude (and probably by significantly more) over commercially available QCM systems. More importantly, the np-Au sensors to be developed in this project will significantly improve the operation of QCMs for measurement of adsorption from liquids. QCMs detect mass adsorbed onto smooth Au electrode surfaces by extremely sensitive measurement of shifts in the resonant frequency of the quartz crystal. In the presence of liquids, however, there are shifts in the frequency that also arise from dissipation due to the viscosity of the liquid.

Engineering students at Carnegie Mellon are often involved in research labs with faculty, post-doctoral researchers, and graduate students. But Marcus Yu had the unique experience of working in a lab that included researchers who were entirely undergraduate students.

Foundation for the future

Zachary Blonder’s experience conducting research on processes relevant to pharmaceuticals synthesis with Nisha Shukla as an undergraduate steered him toward a position in the pharma industry after graduation.