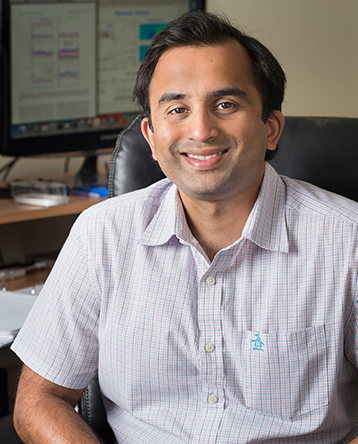 Aditya Khair is a professor of Chemical Engineering. He obtained an M.Eng. in chemical engineering from Imperial College London (2001). He received a certificate of advanced study in mathematics from the University of Cambridge (2002). Later that year, he began a Ph.D. in chemical engineering at the California Institute of Technology under the supervision of John Brady. In 2007, he began a postdoc in chemical engineering at UC Santa Barbara working with Todd Squires. In 2010, he joined CMU. His research utilizes applied mathematical techniques to investigate problems in fluid mechanics, rheology, colloid science, electrokinetics, and electrochemistry. His work has been recognized through several awards, including the Metzner Early Career Award from the Society of Rheology, the Camille Dreyfus Teacher-Scholar Award, the NSF CAREER Award, the Charles Kaufmann Foundation New Investigator Research Grant, and the Frenkiel Award of the APS Division of Fluid Dynamics.

A unique collaboration within the Department of Chemical Engineering is laying the foundation for a whole new discipline of fluids engineering.